How to Convert Pounds to Gallons?

Pound is a unit of mass or weight while gallon is a unit of volume or capacity. How you can convert one to another?

Two Flavors of a Gallon

Let’s start with a British Imperial gallon. In 1824 it was legally defined to be equal to the volume of 10 pounds of water at standard temperature. It means one pound of water equals to 0.1 imperial gallon.

What about U.S. gallon? It is smaller than its Imperial counterpart because it was originally based on British wine gallon that was different. The U.S. gallon holds approximately 8.35 pounds of water.

The Magic of Ounces

The Rule of Thumb

If you need to convert fresh water from pounds and ounces to pints, gallons or cups, simply convert it to ounces first. Each avoirdupois ounce of water equals to a fluid ounce. Then convert fluid ounces to gallons or other units of volume. This conversion will be exact for Imperial units and usually good enough (4% error) for U.S. units. Of course, you can similarly convert from gallons or pints to pounds and ounces by simply doing the same conversions backwards.

This rule works for fresh water. Nevertheless, the good news is many liquids we use every day are water-based and thus have density very close to the one of water. Unless we care about high precision, we can use the same conversion for them. For example, sea water is only 2% heavier than fresh water, milk is only 3% heavier. Do you always care about such a small difference?

Please don't forget, this chart is precisely correct for pure water. It your substance is close to water, e.g. a water-based solution, the chart will be also applicable, but the actual result might be a bit off. Do not use this table for substances that are not water-based. 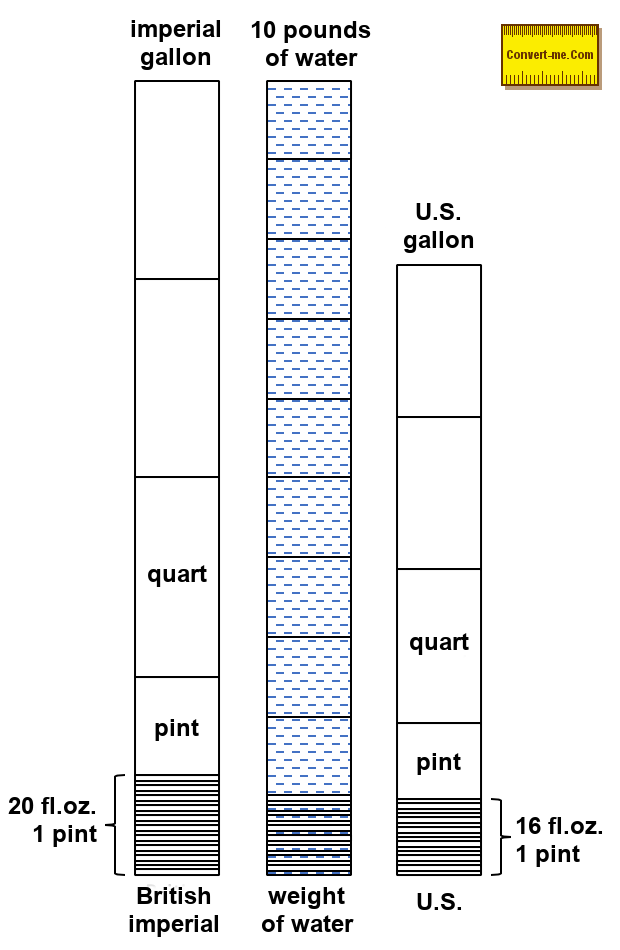 What if my substance is different?

For substances that are not water-based the table above does not work. There is another easy solution though. We have two special online conversion pages where you pick your substance, type the amount you have, and it gets instantly converted to other units. Try these out: